The Vixen and the Oakman 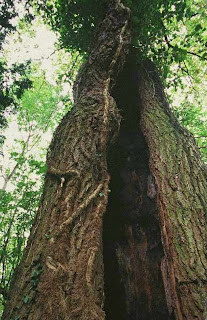 The hounds were closing in on the fox and she was beginning to tire. As she slowed to a weary pace, the hawthorn tree said

“Jump up on me then run along the high stone wall”.

“I’m too tired to jump up” said Fox, “but thank you kindly”.

“There’s a water gap in the wall just here”, said Hawthorn, “squeeze through to the forest like Hedgehog does. They’ll have to go two miles around the wall to follow you”.

“I’m not a hedgehog”, said Fox. But then she heard the hounds and squeezed into the gap and eventually wriggled through, though she left much of her pelt on the stones.

“Thank you Hawthorn”, she said before limping off into the forest.

One of the hounds came to the gap and sniffed the scent of Fox. He lifted his head to bay, but Hawthorn dropped a bunch of haws into his throat and made him cough instead.

“Give her a chance” said Hawthorn, “you’re twice her size. She may be a vixen but she’s got good manners and doesn’t cough and splutter all over my roots.”

The hounds went round the wall into the forest and soon picked up the scent of Fox again. She was limping badly now and stopped to rest in the bracken.

“Oh Holly Tree, block the way behind me” she said.

But Holly was barren and did not answer, but beckoned. Fox slid away and made for a great oak.

“Please let me in” she pleaded. “I bring news”.

Oakman doubted Fox’s words but pulled her safe inside anyway, for he guards all forest creatures.

Once inside she gasped “Your mistletoe bough – men with axes – going to cut it down – I heard them say so.”

“You came through danger to tell us that?”

The hunt went past and Fox bathed her sore paws in Oak’s rainpool.

“Keep away from Barren Holly” said Oak as Fox left. She meant to.

Lake District, collected in the 1940’s.
Posted by Unknown at 21:27 No comments: Links to this post

In the old days before the dykes were made and the wet lands were drained they were full of boggarts and Will-o-the-wisps and such like, and folk dared not venture over the bogs in the dark.But there was one among all the uncanny things that made up for the rest. That was Tiddy Mun. He dwelt deep down in the green water holes and came out at evening when the mists rose. When he came out he came creeping like a limping lobelty with long white hair and a beard that was all matted and tangled all sheathed in grey so he could not easily be seen in the dark. But his whistle could be heard like a peewit laughing into the wind. He was not wicked like some of the others, but was eerie enough. But on wet seasons when the water rose to the people's doorsteps, the whole family would go out together and, shivering in the darkness, would call:

And they would call this until the heard the whistling like a peewit across the marsh, and then they'd go home. Next morning the waters would be down. But then it was decided to drain the marshes, though the farmers would not have anything to do with it, for what would Tiddy Mun do then? But ditches were dug and the land got drier and drier and Tiddy Mun grew angry. Then the cattle began to die, and milk curdled and children pined and died in their mothers' arms. And they didn't know if it was the bogles or Tiddy Mun himself, so they all took a stoup each of water and came to the dyke edge and and poured the water out together chanting:

They listened, but all was dead still with not a sound. Then a great wailing and whistling broke out and the sound of wailing babies, and all the mothers begged Tiddy Mun to lift his spell. And they felt cold hands touching them, and cold lips kissing them and the sound of soft wings fluttering in the dark. Then silence for a while until the sound like a peewit whistling across the marsh and they knew that Tiddy Mun was lifting the spell.

And every Full Moon they would go out with the stoups of water to say their rhyme. While they did this Tiddy Mun stayed for a while longer. But the land is all drained now and he has gone away. And the land is empty.
Posted by Unknown at 23:58 2 comments: Links to this post

Thomas Stonehouse and The Hob 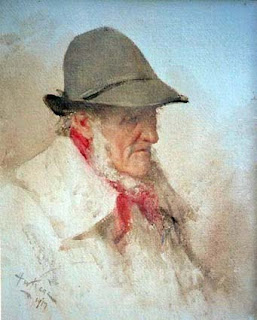 This story was told by an old labourer on the Musgrave Estate. About the year 1760 his grandfather, Thomas Stonhouse, lived at Hob Garth. He kept a flock of sheep, and perhaps a smallholding besides. He had a malicious neighbour, Matthew Bland, of Great Fryup, who one night, for fancied grievance, broke Thomas's hedge and let all his sheep loose.

Although Thomas hunted them all day, by nightfall he had collected only five out of forty and had caught so heavy a chill that he was in bed for days afterwards. Yet in the morning all his sheep were back in the field and new posts and fixings had been put into the broken hedge.The next night every one of Bland's cattle were turned loose and it was more than a fortnight before he recovered them all.


Next day after this, all Stonehouse's sheep were again turned loose. Although his neighbours did their best to get the old man's sheep back, few were rounded up by the end of the day. But the next morning all but four were back in the field, and these were found dead, having fallen into a disused quarry. By now his neighbours were convinced that Hob was helping the old shepherd.

When he was well enough he went to the field to count the sheep and take some hay for them, as it was winter, then sat by the gate waiting for the friend who had promised to pick him up in his cart. As he sat there he was greeted by an old man of strange appearance with very long hair, very large feet, hands, eyes and mouth. He stooped as he walked with a long holly stick. He told Thomas that his lost sheep would be replaced when lambing-time came and that Matthew Bland would get what was coming to him.

When his friend arrived in the cart he was surprised to see Thomas talking to the empty air. He thought the old shepherd's mind was beginning to wander.  When lambing-time came, though winter had returned for a brief, bitter spell, Bland lost many lambs, but Thomas lost none, in fact many of his ewes had twins.

As the saying goes, "When t'hobman did tak ti yan, ya war yal reeght i' t' lang-run."

ↂ
(R. Blakeborough,
Wit, Character, Folklore and Customs of the North Riding of Yorkshire, 1898)
Posted by Unknown at 21:59 No comments: Links to this post