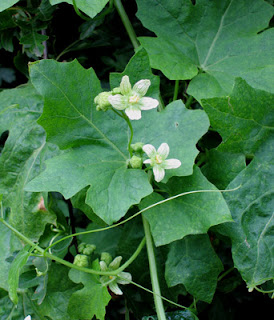 "The White Bryony, whose leaf is not unlike that of the grape, has a magical reputation, and the cottage folk believe its root to be a powerful ingredient in love potions, and also poisonous. They identify it with the Mandrake. If growing in, or close to, a churchyard, its virtues are increased, for though, becoming fainter as they lengthen, the shadows of the old superstitions linger still."

So wrote the Victorian writer on country life Richard Jefferies. Mandrake, which has a root in the shape of a man, had (on Biblical authority) the reputation of being able to get women pregnant. But it was an exotic item so in Britain the herbalists used Bryony instead. The roots grow to some size and are sometimes forked when they can resemble a small baby.

Eirin Gwion (Gwion's Plums) was the name in Wales, after the  miraculous child who tasted some drops from the cauldron of Cerridwen and so was inspired. Cerridwen chased him in the classic pursuit by a witch where the person chased changes shape and the witch then changes too. Eventually Gwion hid as a grain of wheat but Cerridwen became a chicken and ate him. She was then pregnant with him but when he was born abandoned him on a river for him to be found and become the legendary poet Taliesin.

This is a particularly imaginative link between the plant and childbirth. It does more than link it to stories about mandrakes but carries the mythology of the plant through to a specific birth of a legendary character. The 'plums' or berries of the plant are apparently very bitter, which is just a well as they are also poisonous in spite of being used in some herbal remedies. Perhaps these berries were one of the ingredients of the magic brew that Cerridwen was preparing when she employed Gwion to to stir the cauldron.