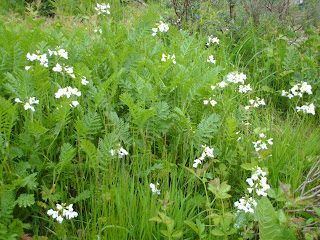 Maytime is a time of brightening days, of flowers and insects and new green leaves. All life seems to be bursting out anew, birdsong is exuberant and we're abundantly aware of the fertility of it all. It's a feeling of joy in your soul which won't be gainsaid.

Yet, it can also be approached in a quantitative scientific way. Some years ago, when we were touring the whole land here every week and noting each new species of flower to appear, we were able, at the end of the year, to construct a graph showing week by week the number of new species of flower appearing for the first time that year. The graph was down at zero in Yule and for a month or two thereafter; the first flowers began to appear in their ones and twos, and gradually the pace increased. As the weeks went by, each new week brought a greater abundance of new species into bloom to add to those already in flower. After a time, these increments began to become smaller again. They still added to the flowers already in bloom, making them even more abundant, but the actual increases began to get smaller. When we drew the curve, the peak was in Midsummer, but the steepest slope was in Mid-May; it was in Mid-May that the Goddess was unfolding all her finery the fastest. And May in the modern Gregorian calendar is very close indeed to Mayday in the old Julian reckoning.

We did the same thing for the appearance of each new species of moth at our windows, and again we got a curve of the same kind, and again the steepest slope was in Mid-May (and we used a book to confirm the picture for the beetles). May is the month of acceleration as Midsummer is the season of abundance. In May the flowers, the moths and butterflies and the other insects and the green leaves are arriving fastest; in Midsummer they're most abundant.

Posted by Unknown at 20:45 No comments: Links to this post