The Knockers of the Mines


In Welsh faerie lore the 'Knockers' are spirits of the mines or caverns who make strange sounds deep in the earth and may try to prevent mining activities which disturb them. In the following account from George Borrow's Wild Wales (1862), a miner tells Borrow of such an experience:

"Very much," said he, "and should like it more, but for the noises of the hill."

"Do you mean the powder blasts?" said I.

"Oh no!" said he, "I care nothing for them; I mean the noises made by the spirits of the hill in the mine. Sometimes they make such noises as frighten the poor fellow who works underground out of his senses. Once on a time I was working by myself very deep underground, in a little chamber to which a very deep shaft led. I had just taken up my light to survey my work, when all of a sudden I heard a dreadful rushing noise, as if an immense quantity of earth had come tumbling down. 'Oh God!' said I, and fell backwards, letting the light fall, which instantly went out. I thought the whole shaft had given way, and that I was buried alive. I lay for several hours half stupefied, thinking now and then what a dreadful thing it was to be buried alive. At length I thought I would get up, go to the mouth of the shaft, feel the mould, with which it was choked up, and then come back, lie down, and die. So I got up and tottered to the mouth of the shaft, put out my hand and felt - nothing; all was clear. I went forward, and presently felt the ladder. Nothing had fallen; all was just the same as when I came down. I was dreadfully afraid that I should never be able to get up in the dark without breaking my neck; however, I tried, and at last, with a great deal of toil and danger, got to a place where other men were working. The noise was caused by the spirits of the hill in the hope of driving the miner out of his senses. They very nearly succeeded. I shall never forget how I felt when I thought I was buried alive. If it were not for those noises in the hill, the life of a miner would be quite heaven below." 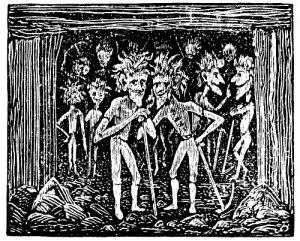 Posted by Unknown at 18:09 No comments: Links to this post