The Court of Faery in March 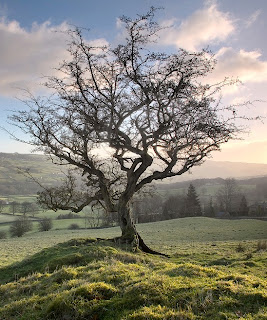 Such cold clear days in the morning

and at night such stars.

So it goes so far this March. The wand of Winter is still held over the land. The Faery Court is held between bare sticks of last year's growth, pale stems of dry herbs, withered flowers. Here and there a celandine shows yellow, and, in the garden, crocuses join the snowdrops as harbingers of Spring. As for the Faery Court, held in such evanescence of growth, they remain invisible to human eyes and even to the most sensitive of souls. But we yearn for them just as they reach out to the green that is to come. Then they may be glimpsed among the ferns. For now they are a  green echo in a brown and straw-bleached land.


As the weather changes (as it does constantly in this Isle of Faery):

Such misty drifting on the slopes of morning

Such cloudy skies as the day goes on

and at night the skies are a canopy through which the distant stars are barely glimpsed.

My love for the land in all its moods is absolute. Nothing would I hold back from dedication to Nature in all her moods come rain or shine.

But now, in this time of transition,  I yearn for the return of the Queen of Faery and all her crew.
Posted by Unknown at 21:30 2 comments: Links to this post