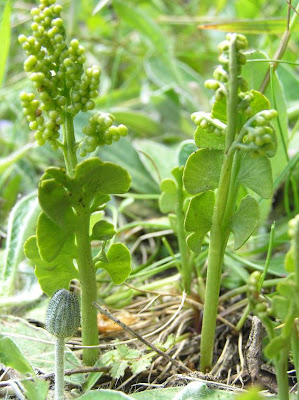 And some of the greine bay tree;

But mine was made of ane humloke schaw,

And a stour stallion was he.

So James Hogg from his poem in Scots dialect The Witch of Fife. Hogg was a shepherd who was 'discovered' by Walter Scott when he was collecting folklore and ballads in the eighteenth century. Hogg often used the folkore he was steeped in as material for poetry, as here. In the dark of the night when the new moon has set they saddle horses with moon fern leaf. The horses are themselves transformed from cows, trees and a hemlock stalk. Riding on moonfern is a way of journeying  to Faery. The fern itself was seen as a 'key' to the Otherworld and so could be used to transport you there on whatever conveyance might be available.
Posted by Unknown at 15:28 No comments: Links to this post